Trevia. A new paver from Unilock. Will we see this in Ontario?

I was on the Unilock website the other night and I thought I would change my region code to see what different products and colour Unilock offered in different regions of The United States. I find it interesting to see what stones they offer in different regions. Yes I am a geek. They list a new paving stone for several regions in the United States. Trevia, a random flagstone type paver. A six unit configuration with random edges and a false joint, hmmm interesting. Will Unilock bring this to Ontario this year? I guess time will tell and I will let you know , so stay tuned. From the perspective of this installer I like the look of these random flagstone paving stones but I'm not a big fan of the waste when you want to make a straight line. If Trevia does show up in Ontario it will probably be similar to Avante Ashlar's colours. Will it even be EnduraColor? That is my prediciton.

*Update* . My prediction, just may be true. Who knew?

I found my Post City Magazine advertisement in the classifieds section over at post city mag. Excellent smithers! I wasn't really expecting to see it listed there but I said to my self. Why not check to see if they put my print ad on the website. And there it was. Spring repairs are in full effect right now. Here is the ad below. Shameless plug. I know. 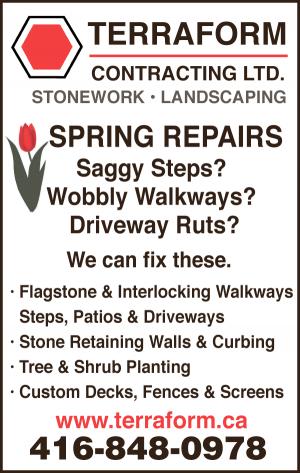 "Don't drink the Kool-Aid when it comes to marketing materials" is what my mother always told me. Well maybe not, but manufacturer's in many industries massage and manipulate many photos that go into those glossy catalogues.

Unilock introduced Classico in 1983. It gave the installer the ability to use full and half circles, fans and sweeping curves. Promenade later renamed to Olde Village Paver was released a few years later. With it's tighter joint size it was a natural evolution. Classico was made for sweeping curves and visual motion. If you wanted to make straight lines, that was more challenging. You better have your string line handy and check, check and re-check. O.v.p offered a tighter joint size which made better straight lines. With o.v.p's circle bundle, it was a match made in heaven. 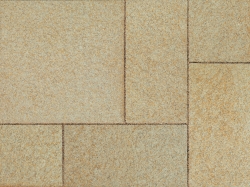 I was at Landscape Ontario's Congress in Jan. Congress is Canada's largest  green industry event for landscape professionals - architects, contractors, designers, and allied trades. After attending a good talk from Charles VanderKooi I walked the show floor before heading over to the Unilock booth to see what was new. Unilock actually had 3 booths this year. One main feature and two smaller ones. In the main booth, there it was. Umbriano, Summer Wheat. A new colour introduction for 2011. And I must say I like this colour. I don't think these pictures do it justice. You really have to see the stone in person to get a real appreciation of how nice this paving stone colour is.