e read one of my previous articles about the decline in popularity of the circle you might be asking yourself the question, the circle, it seems so timeless how can that not be popular. It’s not so much that the circle isn’t being used in hardscape design, as a matter of fact, the circle shows up a lot in projects with round fire pits and curved seat walls. What has fallen out of favor is the size of interlocking concrete paving stones, more specifically, the smaller sized paving stones that are used in making a circle are not currently desirable. The small wedges in a circle bundle and especially the ‘twinkie’ sized stone are not a fan favorite anymore. I’m sorry, but the twinkie, you’re fired.

So what’s actually popular these days in hardscaping? I’m glad you asked, currently many manufacturers of concrete paving stones have been producing large format pavers. Big is in, I mean BIG, how big? I have seen large size pavers ranging from 24” x 24”, 16” x 32” and some special order products reaching 18” x 36”. With the ever increasing sizes in dimensions so can the thickness vary depending on application. Some of the really large sizes may only be available in 90mm or 100mm or over 3” thick. These large sizes will generally be a minimum of 2” thick, manageable in terms of weight but still awkward to install. For all the aching backs out there yearning for the little stones with which you could easily pick up in one hand don’t worry there are still many options in that category. However, the market has spoken and big and even bigger paving stones and slabs are currently trending, and there is no turning back.

It's all about accessThese are the front rock steps, this would be hard to go up and down all day with a wheelbarrow.

It's all about accessThese are the back steps, not as bad as the front ones but it's still narrow.

It's all about accessThe hill on the neibhbours side that saved us a lot of work.

It's all about accessThe front lawn, a rather long stretch from the work area, still easier than the rock steps. 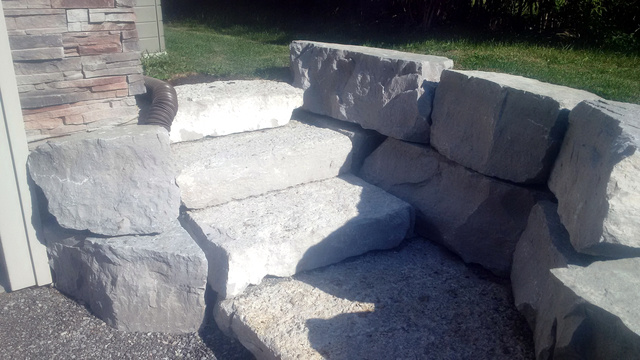 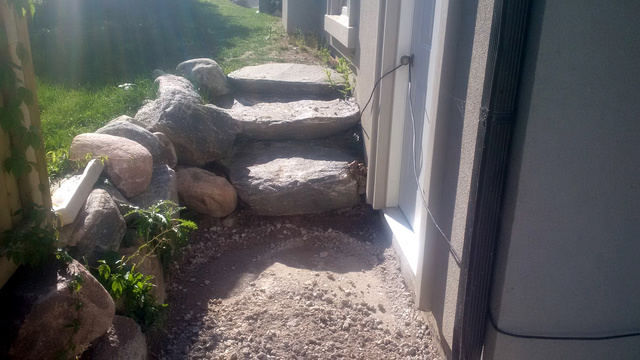 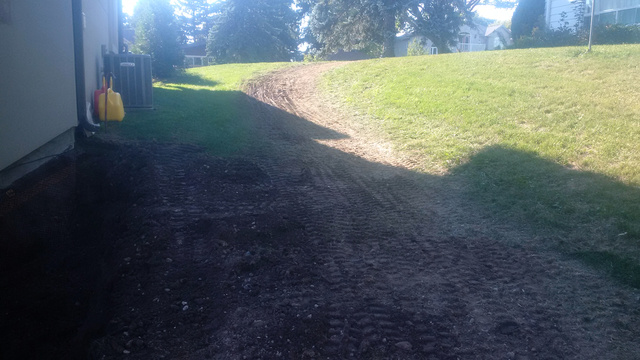 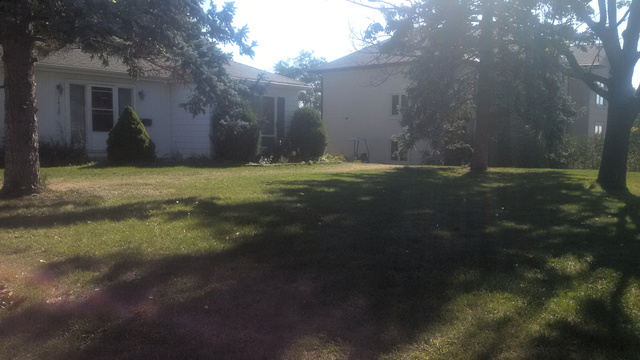 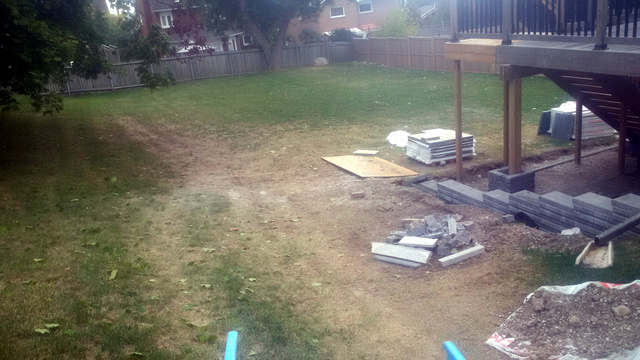 So when I was contacted about a driveway, I was thinking, large format, large format. For the driveways though, you don’t want to go too big because the pavers might be prone to breaking, if they are not thick enough. In the future, if I look in my crystal ball, there will be options for large driveway stones because they will increase the thickness to over 3”, we’ll see how that works out. For now, my back is happy with the sizes that are currently available. For this driveway a stone was chosen that comes in 3 sizes, the biggest one coming in at 13”x16”, not too big. The materials were finalized and we signed an agreement to install their interlocking concrete paving stone driveway. Instead of installing their driveway we did a complete 180 and installed their patio, something the homeowner’s wanted to do, but weren’t quite ready to pull the trigger on, the work on the patio was to be completed the following season. This might not seem to be the most logical approach but as you read on, it will eventually make perfect sense, I always make perfect sense, usually.

The property for this project is not the most typical for The Greater Toronto area. It’s a good size lot with a large back yard, and I mean a large back yard. It’s a newly built home but with very poor access to the backyard. The access is fine if you want to walk to the back but what I am talking about is the necessary room needed to move a substantial amount of soil and gravel back and forth from the driveway to the back yard. It seems that every project we work on has poor access to the backyards, we can deal with that. I could say poor access is the new normal, it’s the very poor access projects that can cause a lot of grief. As you can see from the pictures below there is a set of steps from the driveway and another set of steps that lead onto the patio. You would have to be a svengali wheelbarrow operator to navigate this side for access. This side was ruled out as the main access route for moving in and moving out of materials, as there would be a lot of soil that would be removed and a lot of gravel and interlock to come back in. The other side of the house was considered, but there is absolutely no access to the driveway from this side. There is a 6’ - 8’ high retaining wall on this side. There would be absolutely no access from this side, that’s for sure. What to do?

It just so happens that the house next door was for sale and ultimately sold. The previous owners had moved out and the house was vacant. Fortunately the homeowner talked to their neighbor before they moved out and brokered a deal with them. The deal was pretty basic, we could use their driveway for storage of materials and a place to get rid of the excavated soil. The best part of the deal was that we could use the neighbor’s side as our access to the backyard, glory hallelujah!

The homeowner’s put the patio project on high priority because the property next door was being sold and two homes would to be built. The decision was made to do the patio now and do the driveway later. We had, as they say ‘as good as you’re going to get’ conditions, for our access woes. This would also save the homeowner’s money because hand wheelbarrowing yards and yards of soil up and down those rock steps, would drive up the costs. This is how a driveway project turns into a patio project. The access wasn’t perfect, there was a hill and a long stretch of lawn before we could offload the excavated soil. Fortunately we have a machine that could go up and down this hill without breaking a sweat, certainly a more favorable situation than wheelbarrowing up and down the rock steps.

We got to work, excavation of soils was the first order of business, and boy, there was a lot of soil removed from this area. Thanks to the newly formed access alliance this process was expedited with efficiency. The area we were working on was unused space under a deck. There was a hill that sloped into a portion of the area that would be reclaimed. The plan was to remove the slope and install a retaining wall to increase the useable space. As you can see from the before pictures the area under the deck was quite ugly, no grass would grow and it was becoming an eyesore. When it would rain soil would continually splash against the house and the patio door, making a mess, a real frustration.

After the excavation was complete we had to call in our stucco man to fill in the stucco where the hill previously was. This is fairly common when working on a retaining wall or steps on a stucco house, and there’s a lot of stucco in the Toronto area. Stucco repair is sometimes needed when working on a hardscape project, fortunately I met a good stucco contractor while working on a project and he comes in whenever needed, a good man to know. Excavated soil was removed and gravel came in, it was a beautiful thing. Our retaining wall and interlocking stone was delivered, I requested the forklift, the truck parked on the street, the pallets of stone went up the neighbor’s driveway, over the lawn, down the hill and were dropped off at their final destination, this was working out rather well.

The calm before the stormThe area in question, turning unusable space into usable space.

Patio excavationRemoving the topsoil so we can install a solid gravel base.

Retaining wall excavationRemoving the hill for the retaining wall. There was a lot of soil that came out of this area.

Umbriano bundlesThank you mr forklift, this saved a lot of handling work.

Stucco RepairThe stucco had to be filled in after the hill was removed.

Pillar constructionCovering up the deck foundation with a pillar.

The finished patioThis is a nice area when the grandchildren come over to play on and ride their toy cars around on.

The finished patioSummer wheat is a beatiful color.

The finished patioLook back to the first picture, not a bad transformation.

The finished patioNice and smooth. The calm before the stormThe area in question, turning unusable space into usable space. 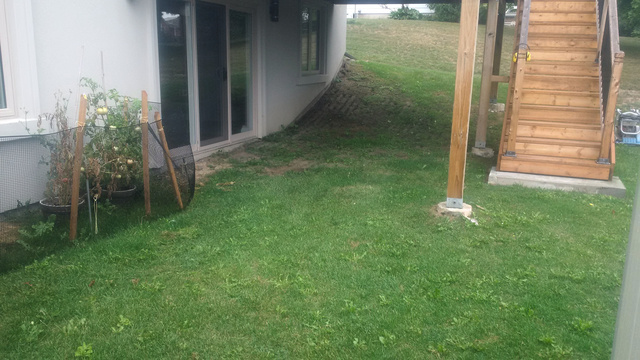 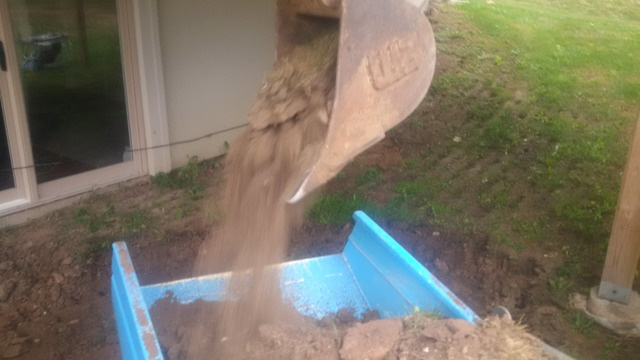 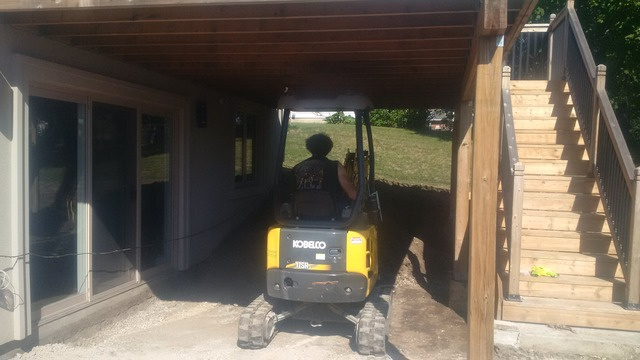 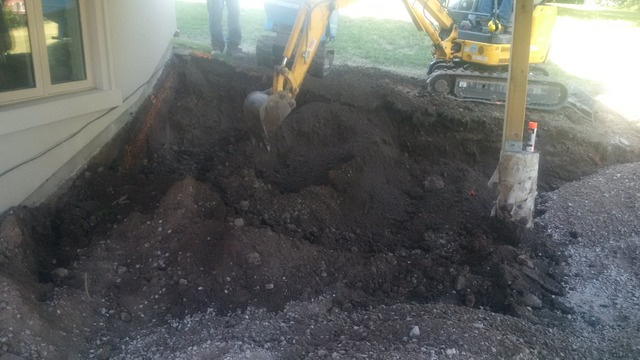 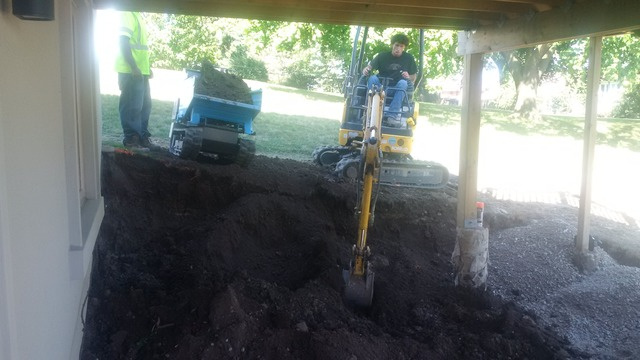 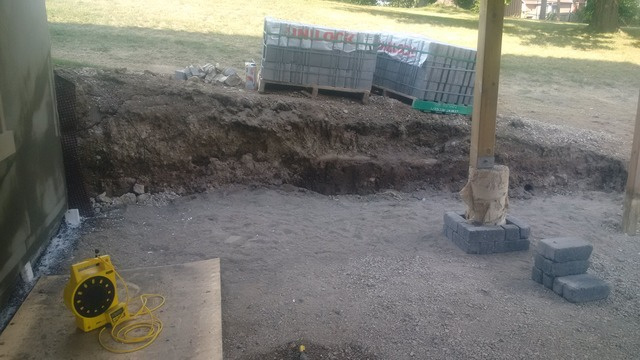 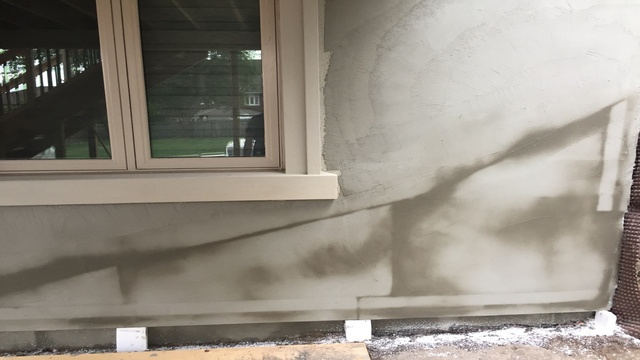 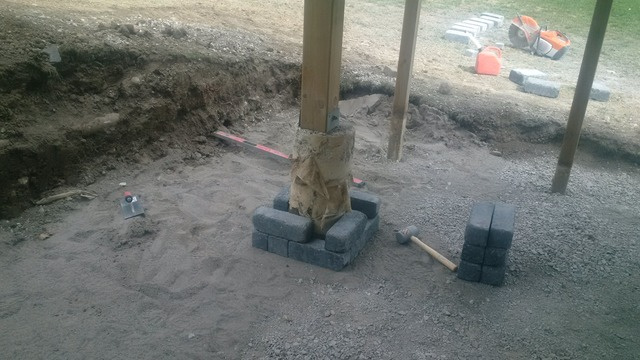 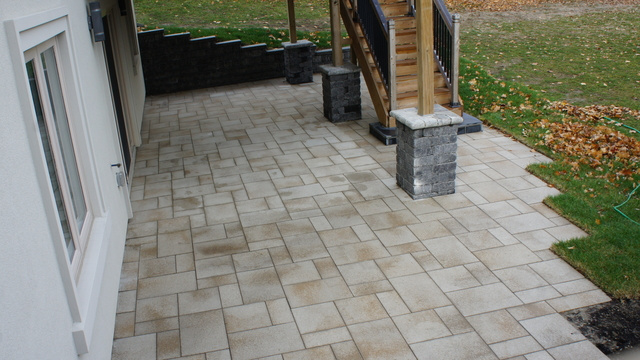 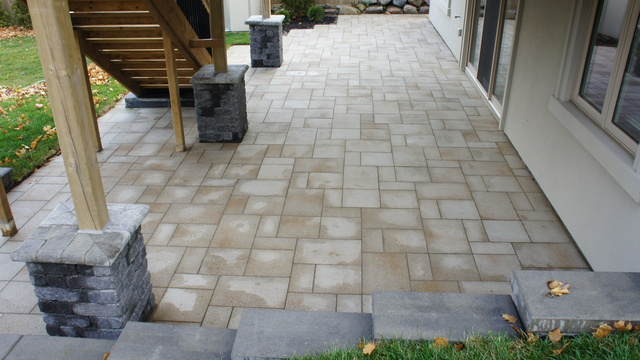 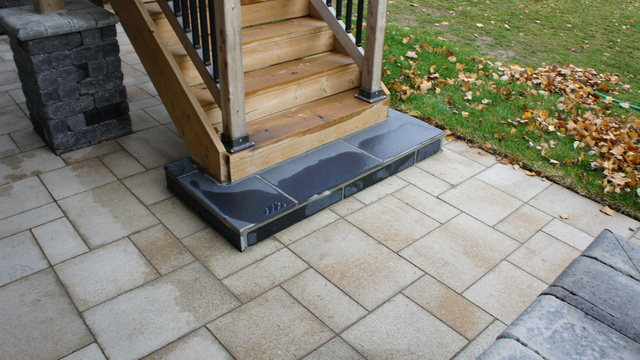 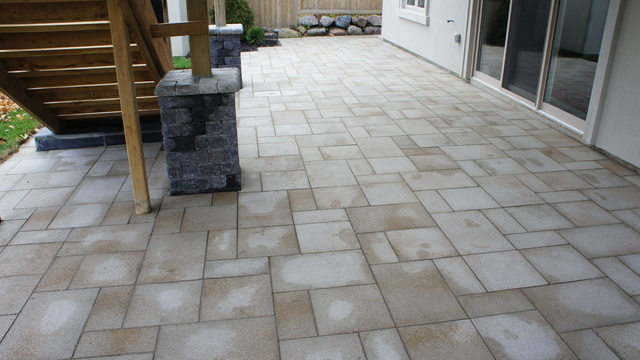 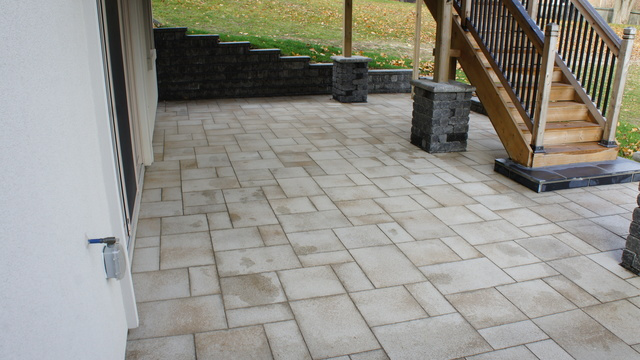 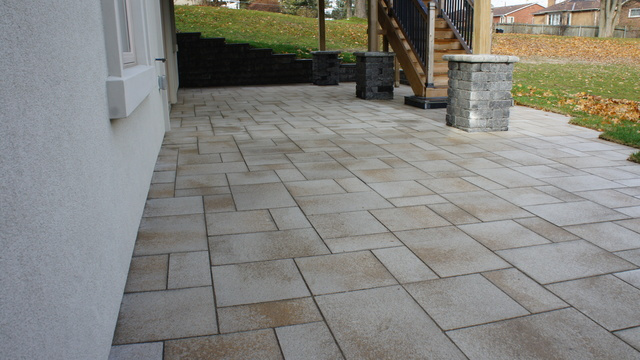 Work proceeded in an orderly manner from compacting to screeding, installing the retaining wall. Of course large format interlocking pavers were installed. The homeowner chose Unilock Umbriano in the summer wheat color for their patio. Umbriano has been out for awhile, it’s not really new at this stage of the game, although, Unilock added to the line, a 6cm random bundle was introduced. Rather than purchasing individual sizes, the bundling configuration comes with 3 sizes. The thickness is also thinner 6cm vs 7cm so it’s a real contender for those patio and walkway areas. As you can see from the final pictures of this patio project, it was definatly worth all the work to turn this unused and ugly area off the back into useable space that can be enjoyed by this family for years to come.

Hardscape Materials Used On This Project