Trends in Hardscaping - The Circle

It seems, that it wasn’t that long ago that every project we installed had at least one circle or several fans in it. Circles and fans were all the rage and many a driveway, walkway and patio were installed with at least one circle or a combination of several circles and fans. Throughout the greater toronto area there are some very detailed driveways with circle and fan designs. As with all things, what was once popular will eventually fall out of favor and become unpopular. So it is with landscape and more specifically, hardscape design.

The once mighty circle bundle has almost been completely wiped out, like a rare species in the hardscape world.  Almost every manufacturer of interlocking concrete paving stones has stopped producing the circle bundle. Large format pavers have replaced the smaller stones and the trend is to go bigger and bigger. It also depends on your market but there may only be one manufacturer left with a circle bundle in your area or none at all. In the Greater Toronto Area I only know of one manufacturer that still makes a circle bundle.

So when I was contacted by a homeowner wanting a circle for their patio I was unsure if we could get the correct materials. The design for this patio focused on one circle for the main portion of the patio the rest of the area would be filled in with the regular size. The circle was paramount to the whole design. The homeowner’s had been dreaming and planning this project for awhile and decided this is the year we’re going to get this project done and it has to have a circle in it. Fantastic, now to find the correct sizes and the right color. Fortunately I didn’t have to hunt all over town for a circle bundle. One of the local hardscape material supply yards still had some circle bundles left in stock. The big question was, what colors were left and what sizes, let’s not forget this is discontinued product so whatever is left is whatever is left. We were certainly getting closer to the desired objective. The elusive circle bundle was found and in the right color that the homeowner liked. All I had to do now was to find the square and twinkie bundle and then the large rectangle for a border. After walking the rows of stone I found the corresponding square and twinkie bundle, but there were no more large rectangle pavers left , uh oh.

So close, yet so far seemed to fill my thoughts as I walked the rows one last time, there were no corresponding large rectangle pavers. I met with the homeowner’s and presented my findings. There were a few options presented, the first one was to abandon the circle concept altogether and just chose something completely different. This option was not well received, the circle was the focal point. The final option was rather simple, why not just eliminate the border or ‘soldier course,’ the kiss theory prevailed. Not to mention the patio has a 2 row wall/step so the need for a border isn’t really needed. If there was no wall a soldier course would have been needed, you can’t have a picture without a frame. So with all the details ironed out I put the order in for delivery right away.

When you look at the final pictures below, I think you can agree the circle really suits this backyard. The patio area is a little lower than the surrounding garden. We installed a curved 2 row wall around the outside, which worked out nicely to allow for a comfortable 6” step into the garden. Without a circle bundle the same effect could have been achieved with a standard paver but the edges would have to be cut, resulting in more time and more cost. Maybe the circle bundle isn’t a bad idea after all? Right now we are in the large format era and the circle has fallen out of favor. As with fashion what’s old is new again and it will be interesting to see when the circle makes a comeback.

The Circle Patio Project - TorontoLoading the mini bin with soil from the patio excavation.

The Circle Patio Project - TorontoThe circle is complete, a great fit for this urban garden.

The Circle Patio Project - TorontoIt's not the biggest area but it's this homeowner's oasis. 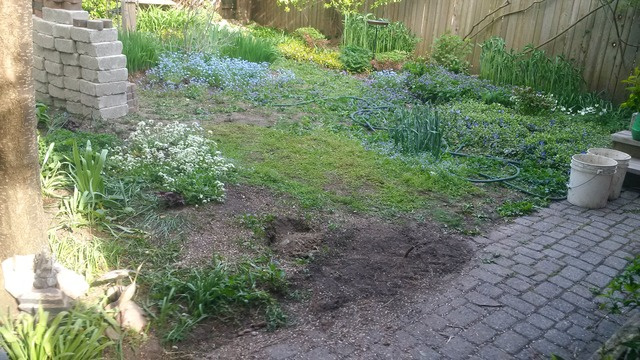 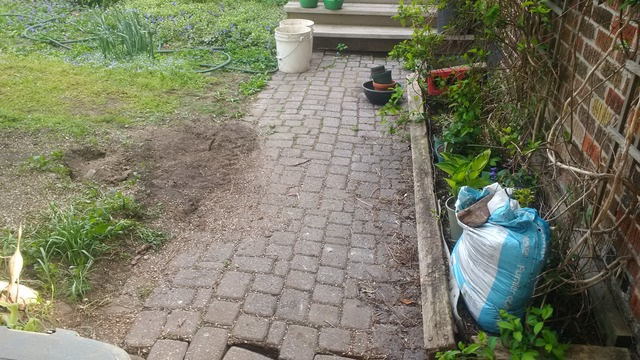 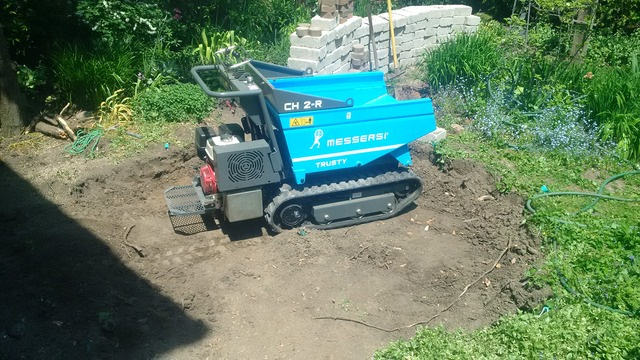 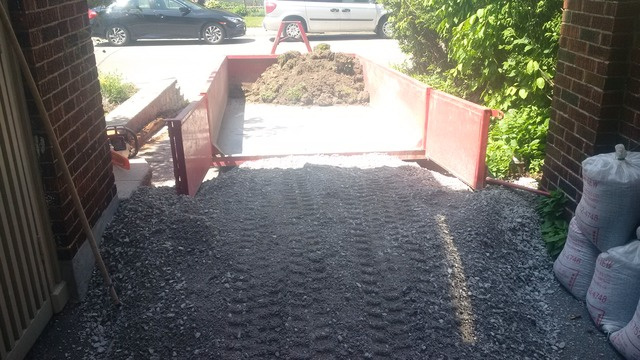 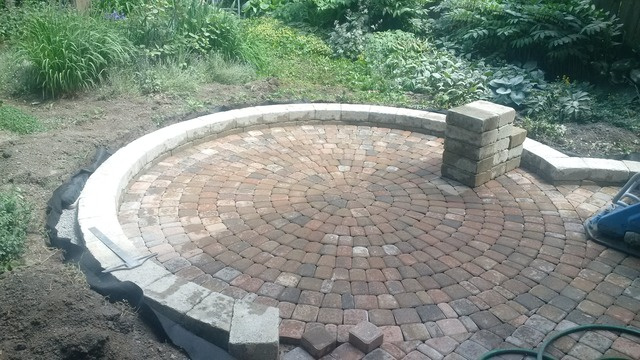 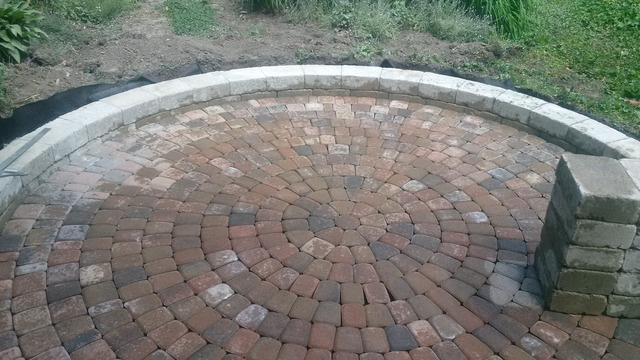 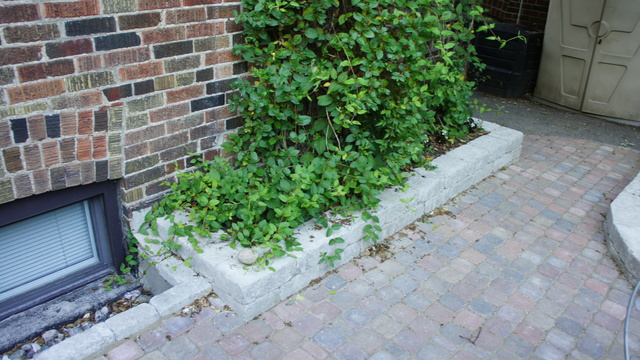 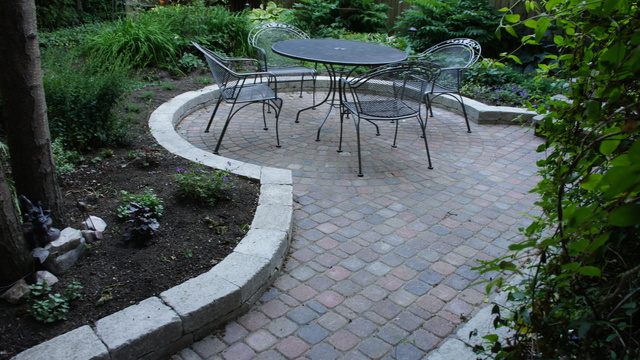 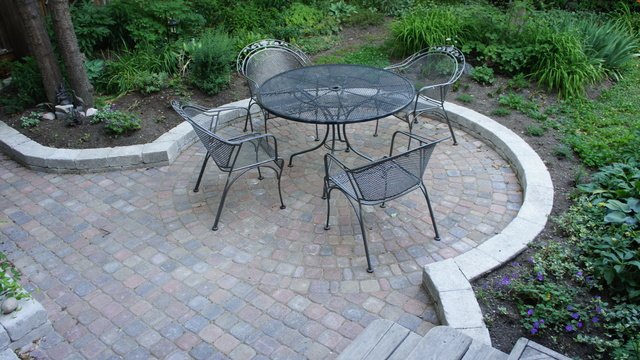 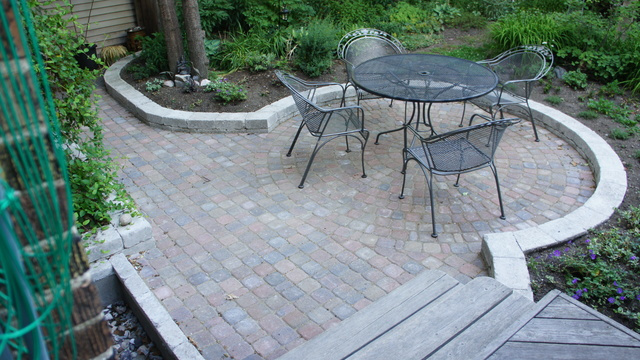