For this homeowner the focus for their project revolved around the back steps. The previous steps were poorly constructed and had too high of a rise. As a rule of thumb exterior steps should have between a 6” - 8” rise and a 12”-16” tread. For the steps we construct the rise is usually around 6”, this is because of the materials we use. When steps have a return or sides, the rise is determined by the materials. For example, if your steps are constructed out of retaining wall block and have sides the rise will be 6”.

It seems many inexperienced contractors do not know how to calculate rise and run for steps. There are too many steps with odd size risers and/or treads. There are many steps with too big of a rise, over 8” is too high, the maximum allowed by Ontario building code is 7 7/8”. It's best to check with your local municipality to see what their guidelines are for steps and allowed rise and run.

Steps are important and this was a highly debated topic on this project. The homeowner wanted a very specific design for their steps. They wanted steps with angled sides, at first I though this was a great idea but upon further investigation I began to have my doubts. Building the treads this way would look awkward within the width we had to work with. There just wouldn't be enough room to build them this way and have them look nice. Angled steps look nice when they flare out at the bottom and are wide, 8' - 10'. When the area is smaller, 6', this type of construction just doesn't look right. Sometimes the K.I.S.S (keep it simple stupid) theory really is best. What further complicated matters is that we had to add one more step to make the grading work properly. Angled steps would just consume too much valuable patio space. So the decision was made, we would use, Natural Stone Steps, specifically, Brown Wave Sandstone.

One other unique thing we did on this project, which was the homeowner's idea, was to take up the old patio stones and re-use them down the side of the house, brilliant! After the paving stones were installed they were pressure washed and I have to say this is almost a highlight for this project, the unsung hero shall we say. They looked fantastic, even the homeowner was surprised and commented, “These are our old patio stones?” This area is used for storage, it's a perfect spot for the storage and recycling bins. It's a great little spot to store those items you want to keep out of sight. And as we all know the only other spot is the garage and like so many other families, this families stores all the bikes, camping gear and all life's other “stuff.”

After the side was completed we went on to the main event, the patio. The design for this patio involves two areas. The first space, right off the back door is for the table and chairs. There is a second area closer to the back that is used for what I would call a barbecue station. This station is used a lot, so much so that the homeowner was getting tired of continually carrying propane bottles back and forth to get refilled. The solution was to run a gas line and electrical power line out to this area. We trenched the line and a licensed gas fitter came in and hooked up the gas. An electrical line was run in conduit at the same time and the trench covered back in.

The decision for the actual patio stones wasn't too difficult. Unilock's Northshore in Valley Grey was the eventual winner. We did make one change, instead of using Northshore for the entire project we introduced some Copthorne to join the patio and the barbecue station. Copthorne was also used to join the patio with the side walkway that was the old patio stones. Copthorne used the 3 colour mix treatment, meaning, the walkways were installed with an equal amount of burnt clay, burgundy red and old oak colours giving that traditional old clay paver look. Brussels dimensional stone was used as a border accent.

Overall this project turned out fantastic. The homeowner's have a beautiful patio and grill station that they will be using for years. More importantly they have steps that are safe and functional because they get used a lot during the summer.

Products used on this project: 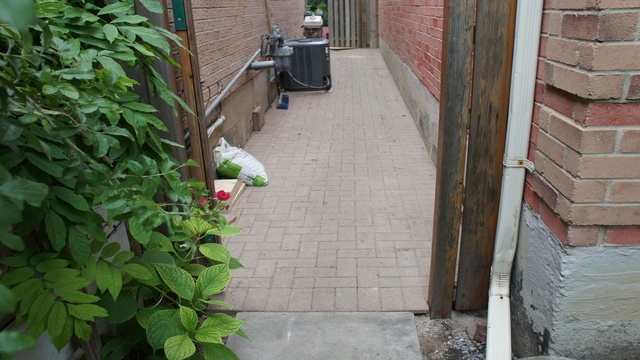 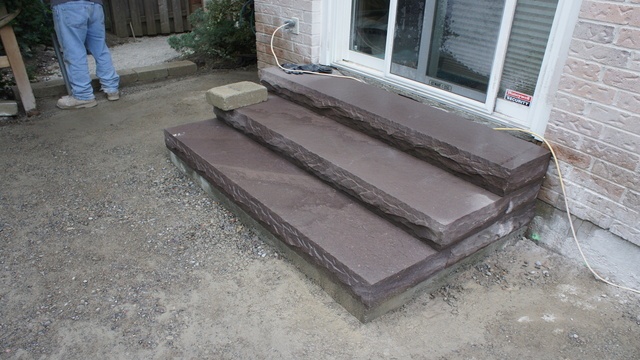 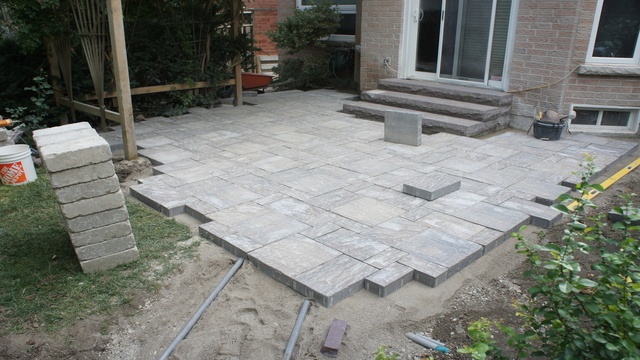 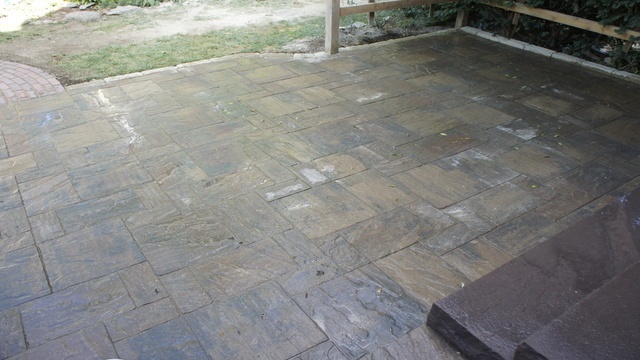 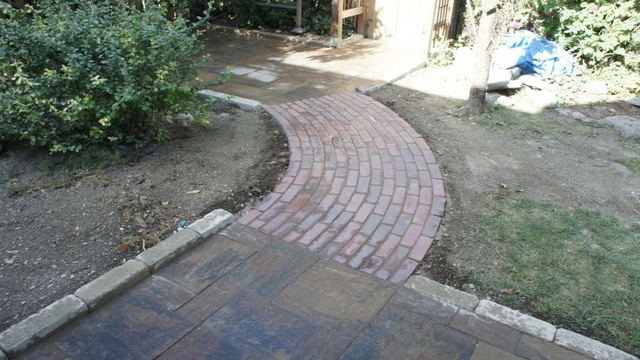 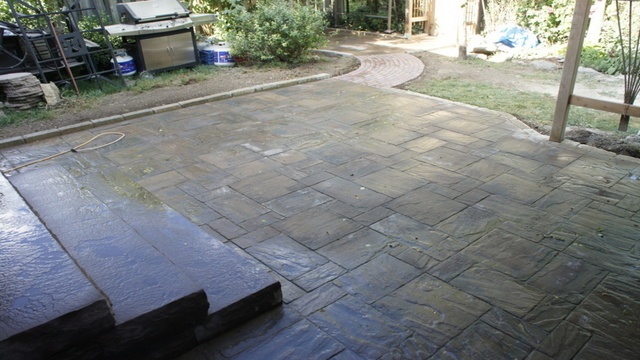 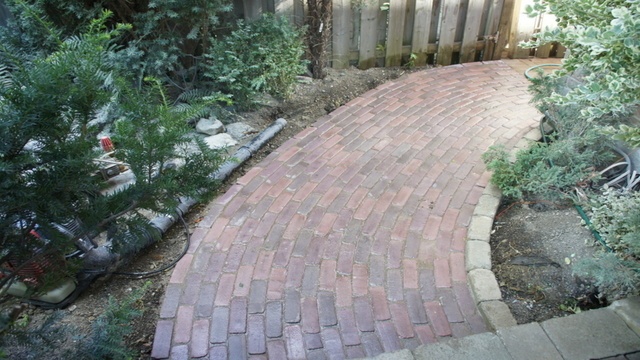 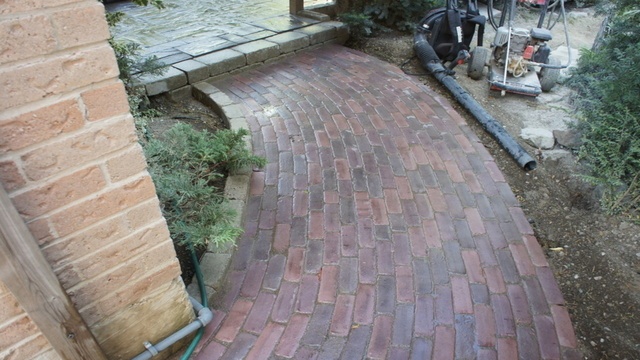 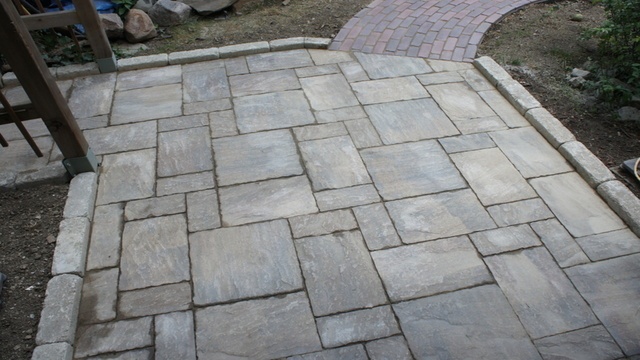 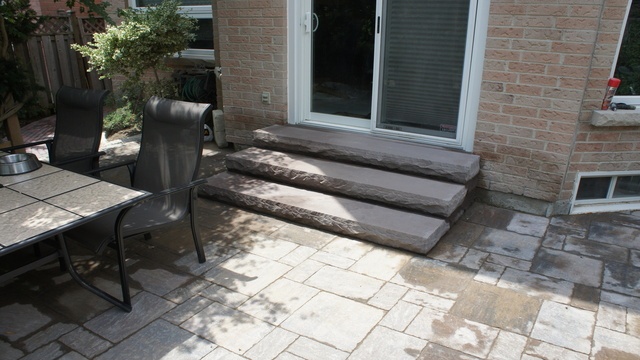